A Few Notes on Collecting Cordwainer

Guest Blogger Steve Davidson blogs as The Crotchety Old Fan, maintains the Classic Science Fiction Channel website and is currently trying his hand at a science fiction novel, following a 20 year career in non-fiction.  His latest non-fiction book, A Parent’s Guide to Paintball, will be released this coming April.

I’ve been a Cordwainer Smith fan since I first laid eyes on Scanners Live in Vain within the pages of The Science Fiction Hall of Fame (Silverberg, ed), the anthology of shorts selected by the Science Fiction Writers of American (SFWA) as one of the finest SF stories published from the beginning of the genre up till 1965.

I devoured that anthology and did so not long after its initial publication – perhaps three or four years at most; I’d recently discovered SF in the pages of Heinlein’s Starman Jones, Del Rey’s The Runaway Robot and Campbell’s Astounding Tales of Space and Time.

That SF Hall of Fame anthology was a godsend: it introduced me to so many fine new writers, Cordwainer Smith not the least among them.

Now what you have to remember is that this all took place something like forty years ago and that the publishing landscape – especially for genre fiction like SF – was not anything like it was today; Asimov’s The Hugo Winners had just been published a few years before, Ellison’s Dangerous Visions was burning up the bookshelves and F&SF, the recently retitled Analog, Galaxy, Amazing Stories, New Worlds and lesser known magazines were the primary sources for short science fiction. Anthologies were few and far between, with Wollheim and Carr’s and Merrill’s Best of the Year collections being one of the few places that the magazine fiction would be reprinted.

There was no such thing as a bookstore chain – no Amazon, no Ebay (nor even personal home computers). The interested and avid science fiction fan was limited to waiting for the monthly installments of the magazines to arrive and was considered lucky if they had a local bookstore that bothered to stock a half-way decent selection of SF.

At the time, I loved anthologies. I could purchase a single book (usually for anywhere from 15 to 50 cents!) and meet a whole slew of authors I’d never been exposed to before; I could then use this research to hunt up novels by the writers who’s work I enjoyed. There really were only three ways to discover new works and new writers – the anthologies and magazines, the huckster’s rooms at conventions and used bookstores.

The one thing that they all shared in common was time. Acquiring new works back then was not a pro-active activity, it was a re-active one. Waiting for the magazines to arrive (waiting 30 days for what you’d consume in one) waiting for something interesting to show up at the used bookstore (I went weekly, if not more frequently), waiting for a con to take place close enough that my parents would allow me to go.

The upshot of all this waiting was that if you found an author who’s work you really liked, chances were you just couldn’t go out and find something else by them. And when you did find something by them you’d never seen before, you often felt that you’d made the find of a century. Then you’d enjoy that new book as fast as you could (usually less than a day for me – most SF back then ran to something like 180 to 240 pages in paperback) – and then you’d be sitting around waiting again.

Such was my experience with Cordwainer Smith. I read Scanners and to say that it was unusual and unlike anything else I’d read up until then is to merely echo what just about everyone else has said about his work. He simply drowned me in new concepts and visions of the future, starting with the idea that space was so dangerous and painful that a special breed of man had to be built in order to be able to handle it. The whole complex life of a Scanner – writing nails, an abbreviated form of English, new names for everything (the ‘Up and Out’ for space), records full of smells – it was simply an overwhelming experience to read that story for the first time.

In Scanners, Smith exposes us to the future of mankind, the far future, and it is called the Instrumentality. A word I’d never heard before when used as a name for a government. The chosen name alone bespoke difference, the rest of the story hinted at greatness and detail that had to be left to my imagination because, despite the fact that it was in its third incarnation as a collected story, and despite the fact that several other collections of Smith’s work had previously been published, it would be several years before I would be able to lay my hands on them.

Finally, in the mid-70s, there occurred a Smith Revival, if you will, when Doubleday included a volume of his short stories amongst their Best Of series and Ballentine released Norstrilia, the complete novel, for the first time.

I eagerly snapped these up; Norstrilia has remained one of my go to ‘comfort food’ books over the years. I have also managed to acquire everything else Smith over the years. But it has taken a long time.

Most recently I was teased, disappointed and finally rewarded for perseverance when I managed to snag a copy of Fantasy Book #6, the 1950s semi-prozine that published Smith’s first story for the very first time (not counting his high school work).

Scanners had made the rounds and, no doubt due to the strangeness of the tale and its unconventional style of presentation, had been rejected numerous times. Fantasy Book was a cheap little publication, somewhat akin to a small press magazine, something like a fanzine, edited and published by William Crawford under the name of Garrett Ford.

The magazine had started publication in 1947 and only lasted through 1951. In fact, only two more issues would be produced after the appearance of Scanners Live in Vain; Smith made it into print almost by the skin of his teeth.

Fantasy Book #6 made an appearance on Ebay not that long ago; I stuck it on my watch list and was hopeful of picking it up for a song, but the price quickly went through the roof and I had to abandon my hopes of a really good buy. A couple of weeks later someone else listed another copy – but this time they weren’t showing it off in the usual categories. I lucked out and got it for a song.

Smith would wait until 1952 for the story to be collected by one Frederic Pohl, an SF writer, editor and agent who kept his hand in watching the small presses. This, after waiting five years for it to be accepted by any publication (he’d originally written it in 1945).

But Pohl knew what he was doing. William Crawford was no ordinary editor and small press publisher. He’d been the editor and publisher of Marvel Tales and eventually established the Fantasy Publishing Company; he published one of the first SF books ever appearing in book form in 1936, the only book by Lovecraft to appear while the author was still alive and a whole host of other authors who would eventually come to be recognized as masters in the field.

Pohl’s practiced eye saw what Crawford had seen when he wrote this introduction to Scanners: “…the author’s treatment of the subject is so completely different that it makes “SCANNERS” one of the most outstanding stories to appear in any magazine!”

Eleven years after Pohl’s inclusion of Scanners in his anthology Beyond the End of Time, Smith’s first collection – You Will Never Be The Same – appeared in print.

And just a few years later I’d be reading it in The Science Fiction Hall of Fame. I’d soon embark on my own long quest to acquire his works and, like Cordwainer Smith, I’d wait far too long to accomplish the task.

Here’s a copy of the cover of Fantasy Book featuring an illustration for Scanners:  Martel appears to be adjusting his breathing rate – or perhaps his volume. 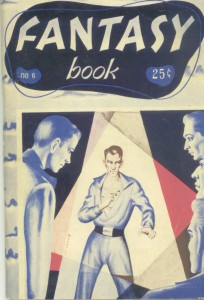 And here’s the first page of the story as originally published: 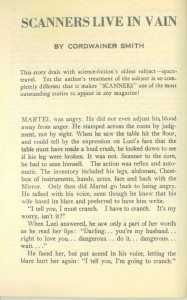 If you click through from here to Amazon, Cafepress, the Science Fiction Book Club, or other commercial sites, I may receive compensation if you buy something. Your patronage is appreciated.