Cordwainer Smith and A. Bertram Chandler

I’ve made no secret (elsewhere) of my gushing fanboy affliction for the science fiction author A Bertram Chandler.   I’m about to inflict it upon you all here within the hallowed pages of another author who’s star burns as brightly as Chandler’s  in my science fictional heaven.

I do so for two very Smith-related reasons.  First, I’ll abuse my privileges a bit to mention, briefly, that I think Chandler is deserving of the Rediscovery Award Committee’s consideration.  There. I said it, and I’m not ashamed to have done so.  I don’t know of any place more appropriate to champion the cause of non-corporeal authors than here.  I’ll close this interlude by saying that if the Committee wants a dissertation, presentation, slides, graphs or an impassioned telephone call, all they have to do is ask.

My second reason for raising Chandler is the homage he paid to Cordwainer Smith in no less than two of his novels. 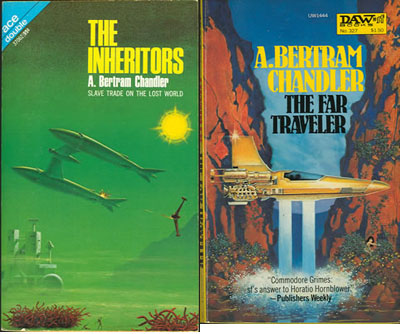 That it was a deliberate tribute to his fellow author is without question; Chandler actually placed Cordwainer Smith’s name right on the page for everyone to see, and used it in a way that any but the most uneducated, ignorant and unconnected reader could possibly miss. (Well, back up a bit: that only applies if you’re already familiar with Smith and Chandler.)

The two novels in question are The Inheritors and The Far Traveler.

Allow me a few paragraphs for background so I can bring the few poor souls amongst you who have never read Chandler up to date.

Chandler started writing in 1944.  His first story appeared in the pages of Astounding Science Fiction. He’d been a reader of Campbell’s rag for several years and dropped in to see the editor during a trip to New York.  Campbell asked ‘Jack’ Chandler to submit a story or two and snatched up the very first thing that came out of the typer.

Chandler, a merchant seaman by trade, British born and Australian by adoption, would continue writing until his death in 1984.  During those four decades he produced more than twenty novels and several hundred short stories.

Most of those stories featured his primary character – Commodore John Grimes – the original Horatio Hornblower of space.  Other’s have since adopted that nickname for their characters, but none will ever hold a candle to Grimes – a pedantic, womanizing, fly-in-the-ointment of authority, unbending creature of habit, champion of the underdog,  if ever there was one.  Grimes’ penchant for getting into and out of trouble in unique, rule-bending ways, not to mention his way with the ladies (more women than Captain Kirk ever even dreamed of holding a candle to) formed the basis for numerous humorous, exciting, strange and often bizarre adventures along the spaceways.

The stories follow Grimes career from midshipman to Commander in the Federation Survey Service (the big boys on the interstellar block), through a period of self-employment as owner of a small mail packet ship, to his eventual arrival on the Rim Worlds, where he would become a Rear Admiral in the naval reserve.  He also did a stint as a privateer, a planetary governor and the star attraction in a sex show along the way – but that’s a little too much detail for our purposes here.

One of my favorite features of Chandler’s Grimes stories are the hunts for (and discovery of) Lost Colonies.  Sometimes colonizing ships get lost.  Less frequently, they are rediscovered, often centuries later.  More often than not the foundling colony fails to survive, but sometimes, through pluck and not a little bit of luck, they manage to hold on and eventually thrive.  How they do so very frequently produces strange results.

Which brings us to the homage to Smith and Chandler’s The Inheritors.

To set the scene:  Grimes, Commander of a medium-sized Survey ship is sent off on a wild goose chase to track down the rumor of a white slave trade that is obtaining its ‘product’ from an unknown world.  He and his crew eventually find their way to Morrowvia, a planet inhabited by humans with strangely feline characteristics.

As they get to know the inhabitants, they learn that everyone on the planet shares just four surnames.  Two of them are ‘Smith’ and ‘Cordwainer’.  Grimes tries to puzzle out why there are so few and theorizes that perhaps only four men survived the original colonizing effort.  He knows they can’t be trade-based names since no one on the planet wears shoes and there’s little if any metal working going on.  To the educated reader, these are fairly heavy-handed clues.

I’ll give away part of the plot because even knowing it the story still remains an enjoyable tale.  The sole surviving male from the original landing was a geneticist, a cat-lover – and a science fiction fan.  There weren’t enough human embryos remaining to found a viable population, so the geneticist used cat stock to make a go of it.

The slave trader (one Drongo Kane, Grimes’ primary nemesis through many tales) has learned this bit of history and is claiming that since the planet’s inhabitants are really only ‘underpeople’, the laws against slavery don’t apply.

Grimes manages to solve this dilemma in a perfectly legal manner, and in doing so reminds us of one of the societal imperatives of Smith’s own Instrumentality, that it is illegal for humans to procreate with underpeople.

There are several other references to Smith and his works that I’ll leave to the reader to discover.

The second tale actually involves a bit of forensic research on my part. When Chandler’s widow Susan died a few years ago, the author’s fans (including myself) went on a hunt for any remaining, unpublished stories.  We had clues that there was at least one, possibly titled ‘Let Sleeping Dogs Lie’.  Even though there was reference to it as having been scheduled for publication in David Hartwell’s Cosmos magazine, David had no record of it.

The Far Traveler is a novel composed of the stitching together of several of Chandler’s previously published short stories.  The sources for most of the sections are well known to Chandlerphiles, but a middle section appeared to have not been previously published. Most everyone was of the opinion that it had been written whole as a transitional section for the novel.  Until I happened to re-read it and discovered that the last line of the last chapter of that section was ‘…let sleeping dogs lie’.  Chandler often drew his titles from the last lines of his stories in a punish manner and this one certainly fits that bill.  Most everyone now agrees that we’ve ‘rediscovered’ that missing story.

And interestingly enough, it’s another story that takes place on Morrowvia, planet of the almost underpeople.  This time it involves dog-derived underpeople.

Kane is back at it again, this time trying to seize control of the entire planet. He’s discovered the true ‘inheritors’ of the colony and plans to use their claims to once again enslave the population (metaphorically this time).  (Chandler was not above poking fun at his own works.)

Grimes manages to unravel the plot and solve the problem for his friends the cat people.  It is interesting however, that Chandler returned to Morrowvia to feature dog-derived underpeople.  Perhaps he felt a need to give the descendants of D’joan as much publicity as he’d previously given to C’mell’s literary progeny.

That he chose to feature both cat and dog-derived underpeople is telling of his deep familiarity with Smith’s works.  Other than the eagle derived E’telekeli, E’ikasus his son, C’william the Cat Master and B’dank the bovine derived, feline and canine derived underpeople are Smith’s most fully-realized non-human characters.

I’ve found other author’s works that are either derivative of Smith’s or that feature and play off of some of his tropes, but I’ve yet to find another that so directly engages with Smith’s ideas and takes them in such an entirely different direction.

If you’re familiar with anyone else who’s done the same thing, I’m sure we’d all love to hear about it.

If you click through from here to Amazon, Cafepress, the Science Fiction Book Club, or other commercial sites, I may receive compensation if you buy something. Your patronage is appreciated.